Guided Tour – Salento and the Via Francigena

Guided Tour – Salento and the Via Francigena

They will take care of you 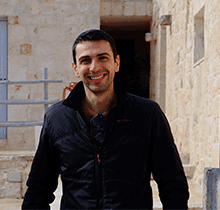 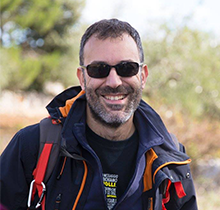 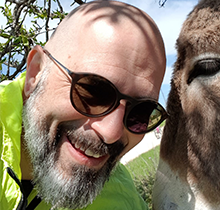 Walking through the Salento peninsula
A walking tour from Lecce to Leuca in order to reach the “end of the world” like the ancient pilgrims. A journey through the history that begins with the unmissable visit to the elegant baroque capital and then continues almost in constant contact with the Adriatic Sea, which is particularly crystal clear in this coastal stretch. Here it is also scattered with watchtowers, cliffs and sea caves among the most beautiful ones in the world.
Even the hinterland of the Italian heel is just as impressive. You will see some pajare guarding the countryside and timeless small villages where you can enjoy the specialities of local food and wine. 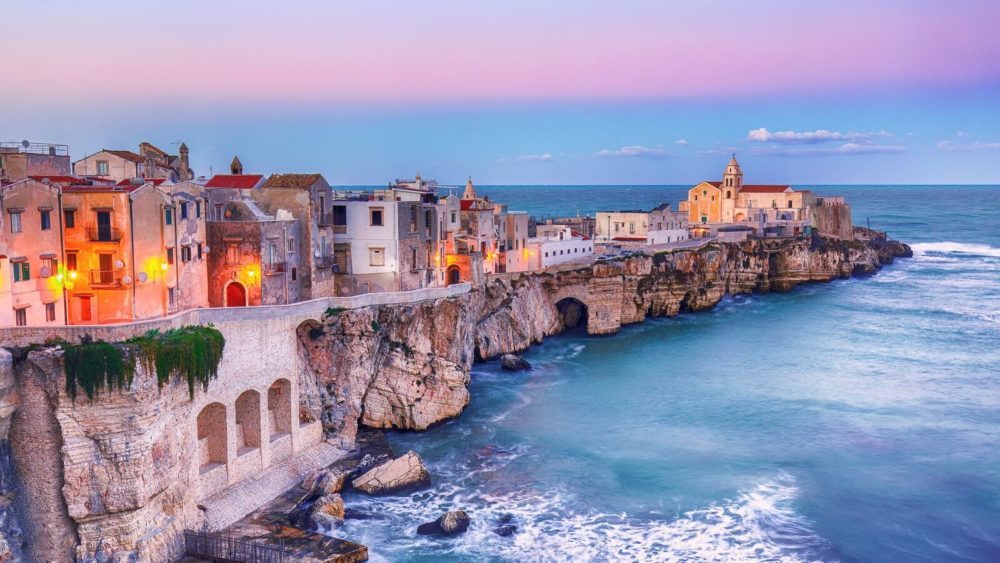 Do you prefer the Gargano region? 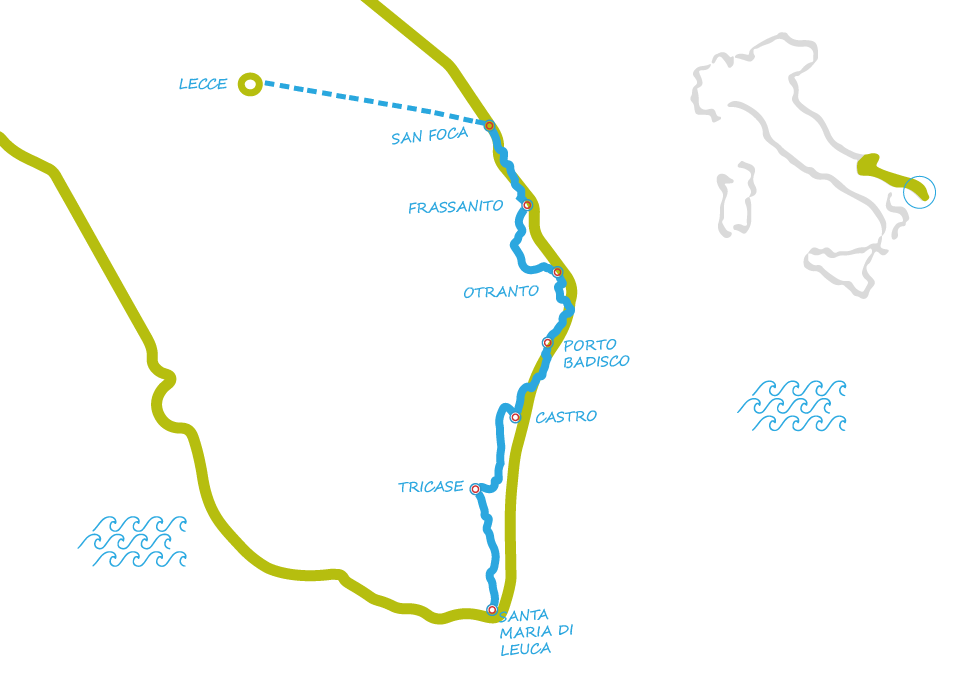 Arrival and check-in in Lecce. Welcome briefing with a guide of Puglia Hiking Tours staff.

After the evening in Lecce walking around the wonderful baroque old town, we will be taken to San Foca by a transfer. The walk starts from the medieval coastal tower. You will see many other of these towers: it’s about military buildings built around 1500 in order to defend the Salento coast from Saracen invasions. After few steps we will reach Roca Vecchia, an archeological park of great importance, which is home to the archeological excavations of a settlement born in prehistoric times and then survived until the Middle Ages. In front of the ruins of Roca, we  will come across the “Grotta della Poesia”, one of the 10 most beautiful natural pools in the world (as National Geographic recently stated). From here begins a stretch of coast with high cliffs overlooking the sea: the path runs between the cliff and a thick pine forest, and you will be constantly enchanted by the colors of the forest, the sky, the sea, the beaches. Along the way, we will pass by Torre dell’Orso, a seaside resort that takes its name from another coastal tower, and which is home to one of the most beautiful beaches in Puglia. Here you can taste a pasticciotto on the terrace of Caffè Dentoni. The first stage ends in the village of Frassanito, just a few steps from the two lakes Alimini.

The second stage begins to tell about the great and unexpected variety of the Salento landscape. We will quit the sea for a while and without going too far, we will spend the whole day by walking next to two lakes. It’s about Alimini lakes, which are two coastal lakes, one of fresh water and the other of salt water. The latter is connected to the sea by a channel. We will walk between the two lakes and the typical Salento countryside, and here you will see a typical cultivation of this area only, the barbatelle, the vine shoots which are prepared here so that they take root and become the basis for new vineyards all over Italy. We will come to Otranto by land and we will enjoy the first sight of it from the chapel of the Madonna dell’Altomare, a beautiful 17C chapel in a splendid panoramic position. A staircase will bring us to the beach and after a few other steps you will be under the large entrance door of the historic centre, a fortified town that ends with the majestic castle. This castle is often the site of important art exhibitions. The ancient town of Otranto was declared UNESCO World Heritage.

The third stage is one of the most beautiful coastal paths that you can cover along the Adriatic. Within a few kilometres it encloses extraordinary places and stories. Immediately after Otranto you will enter the natural park “Parco Naturale regionale Costa Otranto-Santa Maria di Leuca e Bosco di Tricase”. Henceforth we will continue within the park boundaries for most of the tour. The first sighting is the Torre del Serpente, a coastal tower that is partly ruined. Straight after you will see one of the most hidden and unusual natural pearls of Puglia, the bay of Orte and the old bauxite quarry. It’s about an artificial lake created after some excavations for the extraction of bauxite – or better to say, the excavation is artificial, while the emerald water in it naturally comes from the aquifer and creates incredible chromatic contrasts with the bright red of the steep banks and with the shades of blue of both the sky and the sea that surround it. We will continue on a narrow but smooth path until Punta Palascia, where an imposing lighthouse, which seems to dive into the sea, is the first to see the sunrise every morning. We are in the easternmost point of Italy. At some point, (this time from below) you will look at Sant’Emiliano, which dominates the coast from the top of a cliff. A few more steps and we will be at the end of the stage, in Badisco, a small fjord with a beautiful beach where Aeneas, the hero of Virgil’s epic, is said to have landed.

A lot of sea, again, in the fourth stage. The first kilometres will be just few metres from the water, along very ancient traces. Along the way we will meet your immovable and majestic fellow travelers: the medieval watchtowers. We will look at Torre Minervino from below and at Torre Specchia di Guardia from above. In the middle of the stage we  can make a stop in Santa Cesarea, renowned for its thermal baths, with splendid villas in the Moorish style. Here we suggest you stop at a café and order a “caffè leccese”, an espresso which is poured in a glass with ice cubes and sweetened with almond milk. It is one of the most authentic Salentine specialities. Not long after Santa Cesarea, this stretch of rocky coast offers us one of the most spectacular sea caves of the Mediterranean, the Zinzulusa cave. Discovered by the bishop of Castro at the end of 1700, it is now accessible since 1957 and it deserves a stop. A few hundred meters after the cave, the stage ends with the arrival in Castro.

We continue with the discovery of the many wonders Salento has to show: castles, villages, ancient trees, dry stone architectures. We will begin the stage from the Angevin Castle, which gave its name to the city (from the Latin Castrum = fortress), built on the highest point of the promontory around the 12th century. Around the castle is spread the village, surrounded by walls as a defence – as well as Otranto – against the constant assaults from the sea. Just outside of Castro we will notice one of the traits of the southernmost part of Salento, the presence of many small villages, sometimes far from each other just a few hundred meters. In a few steps you will pass through Vignacastrisi, you will glimpse the village of Diso and you will be already inside the small town of Marittima. From here on out, you will enjoy a long path of typical Salento countryside, with some sea views and the presence of several “pajare”, which are circular or square buildings entirely built in stone by local farmers over the centuries. They served as home or shelter for animals and tools. Just before you arrive in Tricase you will meet an enormous tree, an almost 1000-year-ancient Quercia Vallonea. It is an authentic monumental plant, considered among the most beautiful trees in Italy.

In the previous stage we already have traveled long stretches of it, but it is in this last stage that the whole path exactly coincides with the last part of the Via Francigena. Just that way that in the past took people from Canterbury to Rome (through France, that’s why “Francigena”), and then to the seaports of the eastern end of Italy, in order to embark for the Holy Land. In October 2019 the 900 kilometres of the path that lead from Rome to the Salento have been ratified, and this last stretch has been made official part of the Via Francigena and the Cultural Routes of the Council of Europe. Our sixth stage fully covers the last 18 kilometres. Once again you will start by passing through small towns very close to each other, and then you will enter a long hike in the most typical Salento countryside. The arrival is a real plunge into the Mediterranean, with the last steps in the forecourt and under the porticos of the sanctuary of Santa Maria de Finibus Terrae. In this location there is also the monumental waterfall that marks the end of the Apulian aqueduct, an immense work of hydraulic engineering with over a century of life. It is still one of the largest aqueducts in the world.

After breakfast, check out and end of service.

This guided tour is available for the period

Tourist taxes to be paid on site, where requested.
These are some extra services you can add to your trip. If you are interested please contact us.

We have selected for you the best typical guesthouses, local farmhouses in the countryside or 3/4-star hotels (depending on availability), equipped with all the comforts a traveller may need.

On request and upon availability we can offer 5-star accommodations, too.

We will book hotels for you, and take care of your luggage transport from one location to another.

This is a guided tour: one of our experienced local guides will accompany you along the way, and will be on hand to answer your questions and attend to your needs during the trip.

Our tours represent Puglia in every way – in the altimetry, too! Puglia is a hilly region surrounded by the sea: that’s what you will find stage by stage. Some of these stages are almost completely flat; others are funny up-and-down paths; some have short climbs and or panoramic views, which will bring out the adventurer inside you, if even only for some hundred metres.
We thought up an itinerary to achieve a very difficult aim: showing you the most beautiful corners of our region, walking on the most impressive paths.
The tour is suitable for anyone who is relatively used to hiking, whatever the age.
Anyway, it is always a pleasure for us to listen to your needs and customise the tour, offering you the best experience ever!

Lecce can be reached from Bari by train and is connected by Trenitalia the national railway network.
Timetables of trains may vary, so before your trip we will be happy to help you with all the updated information you need.
In any case, a private transfer service with driver from all airports, stations and ports in Puglia and beyond is also available on request.

Clients have one of our assistants at their disposal at all times in case of problems or needs.
On the day of arrival, guests will meet their guide for an information briefing on the tour and to answer any questions they may have. During the tour, he or she will be at their disposal for any needs.

Let's welcome this new Fall 🍂! Are you ready to

Tricase, a stone's throw from the sea in the south

Subscribe to our newsletter to receive our monthly offers and the most interesting travel news from Puglia.